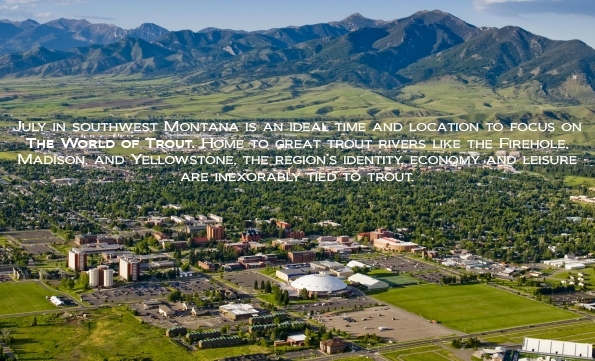 ‘The World of Trout’ – International Congress 2015

This seminal event celebrates trout and the passion they inspire around the world, bringing together a diverse audience of conservationists, scientists, anglers, writers, artists, etcetera, and the public at large. It aims at assembling an international body for structured lectures and discussions on the relationship between trout and mankind. At the same time the Congress is organized as a mere celebration, seeking to add lustre to it with art, music, literature, angling lore, and special events, both instructional and entertaining.

At quite an early stage CTCF was informed about this Congress being organized as its focus is within CTCF’s very mission. Therefore, the purpose of going to Washington DC end of April was (at least) twofold as René Beaumont wished to meet the initiators and key organizers of this first International World Trout Congress: Jeff Kershner (US Department of the Interior; US Geological Survey) and Jack Williams (Trout Unlimited). Being there, no extensive discussion was needed for CTCF to immediately, fully, and wholeheartedly commit to this brilliant initiative. What’s more, René gladly accepted the invitation to join the Congress’ Steering Committee.

During the talks the relationship with the international youth exchange program became more than obvious. Both events share common points of departure: international attention for the wild trout and ditto concern for their situation worldwide. Their missions are identical: engender mutual understanding between cultures and facilitate the transfer of knowledge, expertise, and contacts. And they have the same goals: establish one large, international conservation community, and have ‘troutmen by heart’ take the lead in that.

Further to this Jeff Kershner, Jack Williams and René Beaumont agreed upon the time and the location for the second edition of the ‘Next Generation Freshwater Conservation Leaders Scholarship Program’. End July 2015 this event will take place in Bozeman (Montana, USA), home to those famous trout rivers and their deeply rooted trout fishing traditions…

For more information about ‘The World of Trout’ and the opportunities to participate or support please contact: jkershner@usgs.gov ; JWilliams@tu.org … or rb@continentaltrout.com